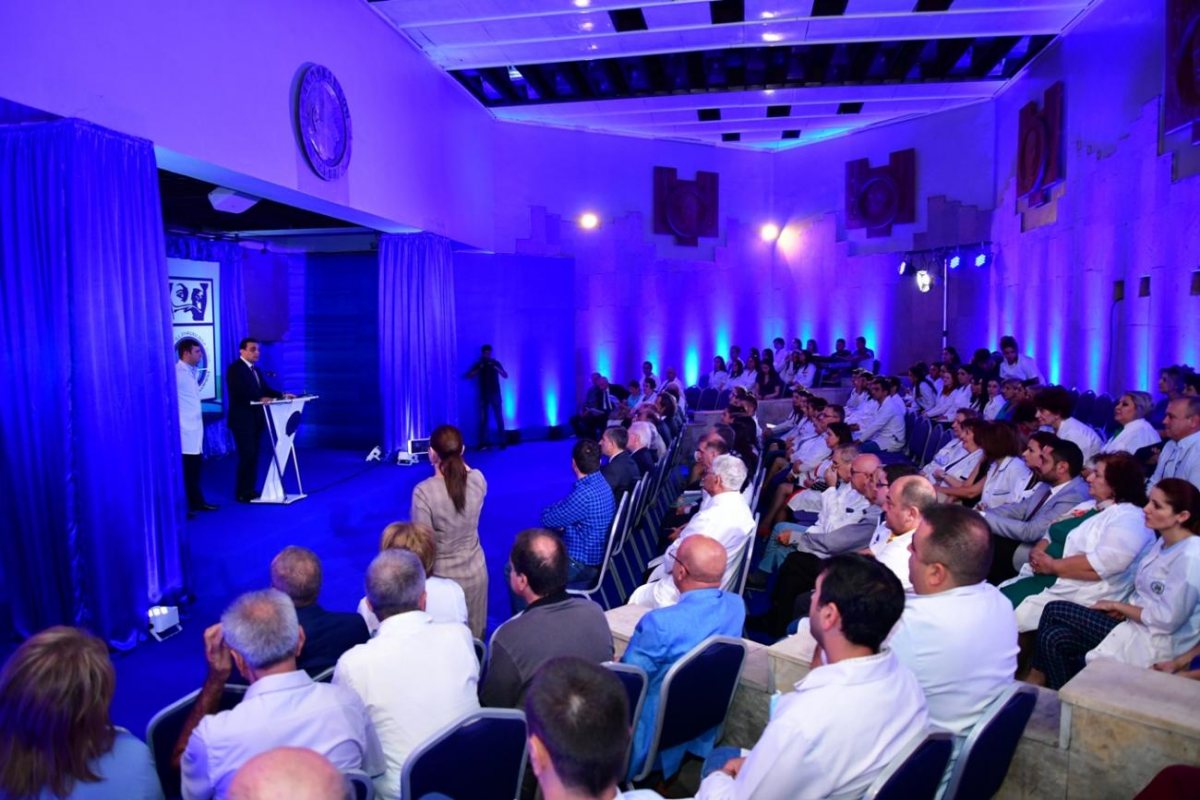 Nobel Prize laureates Ben Feringa and Frederic Stoddart were present at YSMU . The professors are renowned scientists in the field of chemistry. The Trio, composed of Ben Ferguson, Frederic Stoddart and Jean-Pierre Suwage, won the Nobel Prize in chemistry for their work on the design and synthesis of molecular chains in 2016.

YSMU Rector Armen Muradyan welcomed the guests and announced that it is a truly memorable day for YSMU, as world-renowned scientists are visiting the University, who will also deliver graduation diplomas to the first graduates of Hospital Administration Master’s Program. He wished the graduates to become effective and successful managers. According to the rector’s estimation, the medical university is becoming more and more popular with its success every day, and in this respect the visit of world-renowned partners is more important. The number of Nobel Prize Laureates who visited YSMU reached 7, as two years ago 5 laureates had attended the medical university: scientists who conducted open lectures on biochemistry, physics and medicine in the Medical University (in April 2016, biologists Aaron Ciacaner (Israel), Ada Jonath (Israel), chemist and physicist Dan Sechthman (Israel), dresser John Robin Warren (Australia)) and chemist Etienne Negis (Japan)).

The head of the university also stated that respected guests were nominated by the Nomination board and awarded the title of Honorary Doctor of YSMU by the decision of the Scientific Council. The list of Honorary Doctors is expanding, but here, according to the tradition, only the names of individuals who really make a great contribution not only to Armenian but also to global health or medical developments are entered.

As we have mentioned, the day was particularly significant because Nobel Prize winners also participated in the ceremony of awarding the first graduates of Hospital Administration Master’s Program. Head of “Management Mix” Company Raffi Semerjyan also welcomed 25 graduates and guests of the previous year. It should be noted that the Master’s is implemented in collaboration with this consulting organization.

Semerjyan emphasized that the goal of the program is to create a new management mentality in Armenia and make this initiative one of the newest and most up-to-date educational programs in the world. Mihran Nazaretyan, the first minister of healthcare of independent Armenia, also welcomed the Alumni and the Nobel Prize winners, and hoped that the program alumni would succeed in completing the organizers’ gap in the health sector. Upon the completion of official ceremony, renowned professors delivered a lecture that gave students, as well as lecturers an opportunity to learn about their work in the field of science, which is largely related to current and future molecular chains and their application capabilities.

The Mikaelian Institute of Surgery has brought together leading surgeons from all around the world. Experts have arrived in Yerevan to participate in the 22nd Annual Congress of the European Society of Surgery (ESS, www.essurg.org), which includes the 4th Congress of the Armenian Association of Surgeons (AAS, www.AAS.am) and Residents and Young Scientists 3rd European Conference. YSMU management, medical staff, future doctors and guests from abroad celebrated the 90th anniversary of the Armenian Soviet cardiologist-surgeon, doctor of medical sciences, professor, correspondent member of the Armenian SSR Alexander Mikayelyan with a small event organized at the institute.

YSMU Rector Armen Muradyan welcomed the foreign specialists who arrived in Armenia and mentioned that their visit to Mikaelyan Institute of Surgery is not accidental as it is one of the largest university bases. According to the Rector, this event is the launch of major scientific, educational and clinical events, which are planned to be held at the institute. Armen Muradyan also attached importance to the fact that the staff involved in organizing the 22nd Annual Congress of the European Society of Surgery, sponsored by renowned Armenian surgeon Hovhannes Sarukhanyan, includes university specialists.

“This event is a good tradition formed to communicate with the European medical community,” emphasized the head of the university, noting that Alexander Mikaelyan’s 90th birthday anniversary is not accidental, as it was thanks to his work that Armenia became so prominent in medical sector decades ago. The Rector also made account of the presence of future doctors, clinical residents in the hall, who should attach special importance to the tremendous heritage left by senior colleagues and eminent doctors. Head of the YSMU Department of Surgery N1, Vice-President of the Armenian Association of Surgeons Suren Stepanyan, who was elected President of the European Society of Surgery (ESS) last October, also touched upon the history and activities of Alexander Mikayelyan and his institute. According to Suren Stepanyan, the legendary physician and his team have a great contribution to the development of Armenia’s healthcare system.

The institute is on the path to reforms that relate both to surgical and therapeutic trends. Touching upon the 22nd Congress of the European Society of Surgery, the head of the Department of Surgery N1 of YSMU said that the event will give new opportunities for cooperation and will contribute to the exchange of experience. Speeches and memorable details of Alexander Mikayelyan’s biography were presented by his colleagues who had worked with him for many years, and his wife, Lyudmila Sherdukalova-Mikayelyan’s greetings were conveyed.

By the end of the event, participants put flowers at the monument to the great doctor. This event was a tribute to the memory of Alexander Mikayelyan and testified to the fact that the generations have not forgotten his long-term and rich contribution to the development of Armenian medicine.